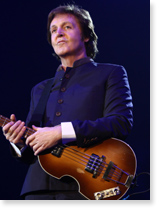 Since writing his first song at the age of 14, Liverpool native Paul McCartney has dreamed and dared to be different.  In the 1960s, as the writer and co-author of The Beatles’ greatest songs, he changed the world of music.  Legendary albums include Please Please Me, Revolver, Help!, Sgt. Pepper’s Lonely Hearts Club Band and The White Album.  McCartney has continued to push boundaries of music over the last 30 years, first as a solo artist, then with the band Wings, and following that as a solo artist again, with recent highlights including 2007’s Memory Almost Full.  Most recently he received critical acclaim as “The Fireman,” a collaborative project between McCartney and revered ambient producer Youth, and for his 2009 work Good Evening New York City.  Equally renowned as a live performer as he is a songwriter, McCartney is also an accomplished, award-winning classical composer.

McCartney performs sold-out concerts to millions of people all over the world, with his 2009 line-up including The GRAMMY Awards; David Lynch Foundation’s benefit concert; headlining the Coachella Festival; and a five-week tour of the United States.  The U.S. tour included the inaugural run of shows at New York’s Citi Field Stadium, the site of the former Shea Stadium where The Beatles made history in 1965, playing a concert that defined the modern-day stadium rock show.

Among his many honors, McCartney was awarded a special Outstanding Contribution Award at the 2008 BRIT Awards at Earls Court in London and an honorary doctorate of music from Yale University.  He is a Lead Patron of The Liverpool Institute of Performing Arts and he was also appointed Fellow of The Royal College of Music in 1995 by The Prince of Wales.  In 1996, McCartney was knighted by H.M. the Queen of England for his services to music.